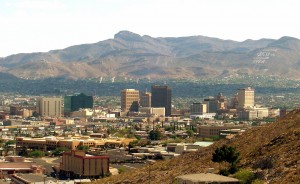 Here’s a little bit about the real El Paso, located on the border.

When Spanish Conquistadors rode along the banks of the Rio Grande in 1598, they discovered a diamond amid the Chihuahuan desert. El Paso has been luring visitors with its mystery and promise ever since. Every year, we have the pleasure of hosting millions of travelers during their visit to the largest international metroplex in the world. Nestled at the point where West Texas, New Mexico, and Old Mexico meet, The Sun City is the perfect place to enjoy the seamless blending of cultures and customs that is our heritage. From the captivating relics of the historic Old West and the treasured traditions of the Native Americans to the Franklin Mountains resplendent with poppies in ferocious bloom, El Paso is the beginning of a thousand dreams come true.

El Paso treasures the ways of its ancestors. We still attend church in our old Spanish missions on the historic Mission Trail – eight of the most historic miles in the United States – built by Native Americans in the late seventeenth century. These architectural gems are brimming with history and are among the oldest continually active missions in the country. The area was also home to famous outlaws including Pancho Villa, John Wesley Hardin and Billy the Kid. If you fancy yourself a modern-day gunslinger, make sure you’re outfitted properly for your high-noon duel. After all, this is the Boot Capital of the World, where you can find endless options suiting every taste and budget, and where a custom, handmade boot is never far from reach.

The beautiful and majestic Franklin Mountains offer a dramatic focal point to the city, and are one of the most visible and beloved of our many treasures. Visitors can ride the Wyler Aerial Tramway to Ranger Peak to get a panoramic view of the city, or drive along Transmountain Road, which cuts right through the mountain. Enjoy a picnic in Franklin Mountains State Park, the largest urban park in the U.S. For outdoor explorers, there’s also mountain biking, hiking and rock climbing virtually any time of the year. Rather take your entertainment sitting down? Catch a show at McKelligon Canyon Amphitheatre. Carved into the mountains, this outdoor venue is home to concerts, plays, and Viva! El Paso. Enjoy an evening under El Paso’s famously tranquil night skies.

El Paso’s unspoiled natural beauty is a rarity in today’s fast-paced world. During the day, our mountains take on shades of purple, vibrant orange and pale green under a sun that shines over 305 days a year in. Wide-open vistas, big skies and beautiful desert weather are the norm, and almost every day ends with a breathtaking sunset. At night, our city lights look like a scattering of glittering diamonds across an expanse of darkness.

El Paso is Texas, but it’s just a little different. So come enjoy the warmth of our sun and our smiles – and do Texas different!

The history of El Paso is a tapestry woven from the vibrant blend of cultures and customs that envelops the thriving and unique metropolitan area that exists today. Our region’s history spans more than 400 years, and fuses Native American, Spanish, Mexican and the American Cowboy traditions into one cohesive whole.

In 1581, Spanish explorers reached the Rio Grande River and viewed a pass between the two mountain ranges rising out of the desert. They named it El Paso del Norte (the Pass of the North). On April 30, 1598, the area was colonized by a Spanish expedition under Don Juan de Oñate. The territory included all land drained by the Rio Grande River.

In 1659, Fray García de San Francisco founded Nuestra Señora de Guadalupe Mission, which still stands in downtown Ciudad Juárez, the oldest structure in the El Paso area. The Pueblo revolt of 1680 sent Spanish colonists and the Tigua Indians of Northern New Mexico fleeing southward to take refuge at the Pass. By 1682, San Lorenzo, Senecú, Ysleta and Soccorro settlements were founded. The increase in trade led to the building of a presidio in 1684 at San Elizario. The trade route became one of the historic camino reales, or royal highways, a name that is still used today.

Not until the end of the Mexican War in 1848 did El Paso finally become part of the United States , with the establishment one year later of the military post that eventually became Fort Bliss. El Paso became incorporated as a city in 1873, and with the arrival of the Southern Pacific Railroad in 1881, the community was assured a stable future.

The Wild West was El Paso. The city flourished during the rambunctious era of gunfighters, cattle rustlers, saloons, famous marshals, and the Texas Rangers. Famous and infamous characters like Billy the Kid, Wyatt Earp, and Pat Garrett also roamed the dusty roads of the city. In 1911, the Mexican Revolution thundered into town and ushered in a new era. Refugees streamed out of Mexico by the thousands into El Paso. The people that remained when the war was over were instrumental in building the unique culture and heritage that is The Sun City today.

The transformation of this city since the days of the Wild West has been tremendous. Today, El Paso is a thriving community reveling in the blend of cultures with our sister city of Ciudad Juárez, Chihuahua, Mexico. It is a major distribution and manufacturing center and the focal point of an annual $20 billion in trade between the United States and Mexico. El Paso has retained its unique history, celebrates its present prosperity, and looks eagerly toward its promising future.